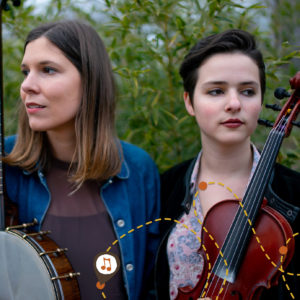 Allison de Groot & Tatiana Hargreaves are two artists on the leading edge of a generation of old-time players who are questioning old narratives. De Groot, known for her intricate clawhammer banjo work with Molsky’s Mountain Drifters, joins forces with powerhouse fiddler Hargreaves (Gillian Welch, Laurie Lewis) to create a sound that is adventurous, masterful, and original, while never losing sight of what makes the music endure. With their new record, de Groot and Hargreaves have immersed themselves in the depths of a centuries-old art form—the interlocking propulsion of Appalachian fiddle and banjo duets—and emerged with a contemporary aesthetic and vision. This is the music they play in their own voices, offered with recognition of the voices that came before—voices that haven’t always gotten the appreciation they deserve. This is a fresh, celebratory collaboration between two of the most accomplished old-time musicians of their generation.

Blog
SAVE THE DATE FOR PICKATHON 2022! AUGUST 4-7
Harvest Festival Sept 30 and Oct 1
Pickathon 2021 Update
See more
Newsletter
Stay up to date on the latest news and special offers. See you at the farm!