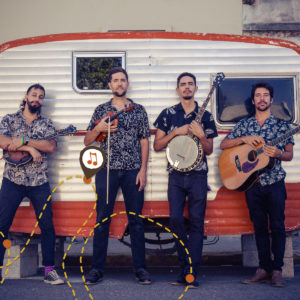 Immigration is a powerful topic for Che Apalache bandleader Joe Troop. A polymath, polyglot, and world traveller, Troop left home at a young age, emigrating from this country in search of a better life. Raised in the North Carolina Piedmont, in the foothills of the Appalachian mountains, Troop came of age to the music of bluegrass and all-night jam sessions at festivals, but being a young, queer man in the South, at a certain point he no longer felt welcome in his own home region. He took refuge abroad, carrying his music and his fiddle with him always, picking up elements of flamenco, jazz manouche, and swing. In 2010, Joe immigrated to Argentina, and, looking to make friends and build a scene, he began teaching bluegrass. Nine years later, Che Apalache, led by Troop, features three powerhouse Latin American musicians – two from Argentina, Franco Martino (guitar), Martin Bobrik (mandolin), and one from Mexico, Pau Barjau (banjo) – and has been taking audiences by storm with their fusion of Latin and American roots music. Famed banjo player and cross-genre trailblazer Béla Fleck was so taken with the band that he signed on to produce their new album, Rearrange My Heart on Free Dirt Records which was nominated for a Grammy for Best Folk Album in 2020. It’s a success story, but Troop hasn’t returned to the States after over a decade abroad to comfort listeners. He’s here to challenge the narrative, to speak directly on what American policies and perspectives are doing to the world.