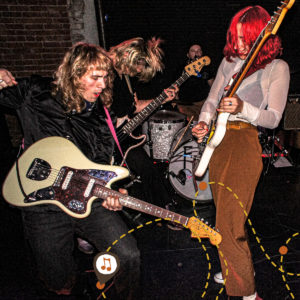 Hailing from the East side of Los Angeles, FEELS are known for their electrifying live shows and two highly regarded LPs: their first album was produced by Ty Segall and released in 2016, followed by 2019’s Post Earth, released on Wichita Recordings and produced by Tim Green (ex-Nation of Ulysses.) Pitchfork gave that album an 8.0 saying the album was, “more musically focused and emotionally unsettled, its once shaggy sound sculpted into post-punk precision..” Live, the band pulls no punches, delivering tight hooks, luscious melodies and satisfying chaos with exuberance. They seek to inspire empowerment and unity by connecting with their audience via joyful catharsis; after all- as Pitchfork points out- “”…polemical discourse and rock’n’roll fun are not mutually exclusive—and, if anything, they should encourage one another.”” 2020 finds the band gearing up to record their third full-length album, expected for release in the Fall on Wichita Recordings. Not bad for a post punk glam grunge krautpop whatever band born and raised in LA.