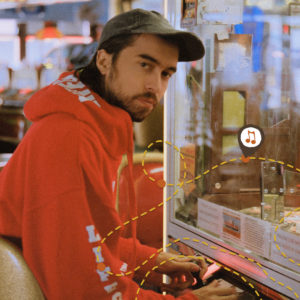 Alexander Giannascoli, better known by his stage name (Sandy) Alex G, started his career with DIY self-releases on Bandcamp. After being labeled by The Fader as “the internet’s secret best songwriter, (Sandy) Alex G began building up an audience with his label debut, DSU (2014), released on Orchid Tapes to critical acclaim from various publications. In 2015, he signed with Domino Recording Company and released his sixth studio album, Beach Music. He followed it in 2017 with Rocket, which received further acclaim and recognition. Giannascoli’s eighth studio album, House of Sugar, was released in 2019. Giannascoli worked with Frank Ocean on his albums Endless and Blonde, providing guitars and arrangements.