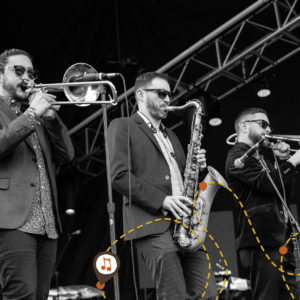 Listening to Seattle-based funk & soul group, The True Loves, is like walking down a favorite neighborhood street, slapping-five with friends, checking up with clerks in their stores, admiring your own dark sun-glassed face in their windows, ducking under flowerpots and smelling the familiar smells of your most cherished locale. The band is its own block party. What began in 2014 as a jam session between three of the city’s best – pocket-perfect drummer David McGraw, intoxicating bassist Bryant Moore and otherworldly guitarist Jimmy James – has since blossomed into a global force that now features percussionist Iván Galvez and four horn players: trombonists Jason Cressey and Greg Kramer and saxophonists Gordon Brown and Skerik. Together, the group’s live performances have garnered them acclaim and millions of streams on YouTube.