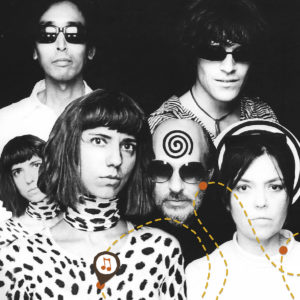 Vanishing Twin are a heterogeneous crowd, no two members are the same nationality or speak the same language. They are would-be doyens of Esperanto if it had only caught on; galactic citizens if it were an option at the passport office. They are scientists and creators excited by rituals and telepathy, book-wormed into action. Dressed for the closing night of the original Dadaist nightclub Cabaret Voltaire in Zurich, they sound like they are playing jazz at the end of the world’s end. They are like nothing else. Challenging, morphing, eclectic, ethereal – engaging. Their new album, The Age Of Immunology, was recorded in spaces reclaimed for their experiments. The sounds you hear are otherworldly, created by scavengers, hunters, gatherers, deft at pinging milk bottles, caressing the Varispeed, and speaking in multi-lingual monologues, punctuated by strings and things. The Vinyl Factory has likened them to fellow sonic adventurers Sun Ra, Ennio Morricone and Stereolab.