Today we delve a little deeper into the 2018 Curation Sunday Brunch with Chef Kasey Mills of Mediterranean Exploration Company and the incredibly lively Orkesta Mendoza. The Curation Brunch might be a little early for some of you festival friends, but this one will get your booty shaking right out of the tent! Learn more about the delicious dynamism you’ll be getting yourself into below… 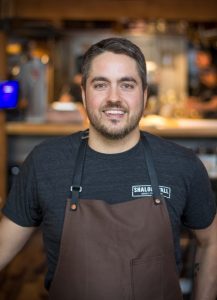 Kasey Mills is Executive Chef and Co-owner of Mediterranean Exploration Company (M.E.C.) in the Pearl District of downtown Portland serving innovative cuisine from the eastern Mediterranean and beyond, Shalom Y’all Israeli restaurants on the East and West sides of Portland, and BYH Burgers in the Pine Street Market and McMinnville’s Atticus Hotel featuring classic Americana cheeseburgers and fries with flavors to take you back to your childhood.

Inspired by the way a region’s cuisine tells a story of its peoples’ interactions and exchanges over time, Mills aims to bring the rich cultural history of the eastern Mediterranean to the Pacific Northwest. His menus of diverse yet cohesive dishes at M.E.C. and Shalom Y’all pay tribute to the exploration of people across the Mediterranean throughout history.

Mills didn’t have a passion for cooking or any experience in restaurants until he was 20 years old. Working as a ski lift operator at that time, he received sage advice from his father to find a job that he could take pride in. One night, craving manicotti, Mills decided to try his hand at a recipe on the back of a box and took such pride in his efforts and creating something, decided he wanted to be a cook. As luck would have it, his neighbor was a local chef and invited Mills to work for him.

Mills moved to Portland, Oregon from South Dakota in 2001 to attend culinary school and immediately began working six days a week while taking classes, working his way up the ranks at well regarded restaurants in the area including the original McCormick and Schmick’s, Oba, Fratelli, and Fenouil. When he heard John Gorham was planning to open a new Spanish restaurant, he introduced himself and was offered the job of Sous Chef of Toro Bravo. He worked directly under Gorham for three years before being promoted Chef de Cuisine.

After seven years at Toro Bravo, Mills opened M.E.C as a co-owner with Gorham. The two have become like brothers in their time in the kitchen trenches and their travels to Israel and the surrounding area for menu research. Mills finds inspiration in his world travels as much as his explorations in his own garden and through the pages of cookbooks. In his free time, he also enjoys camping and spending time with his wife, Dori, their two schnauzers Mr. Brown and The Dude, and their son, Leopold Malloy Mills. 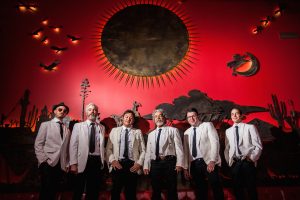 There is a fault line that runs through the city of Nogales: the Mexican-American border. Sergio Mendoza has often crossed it. He was born in Nogales, Arizona, raised in Nogales, Sonora, and now lives back in Tucson, Arizona. But the music he and his band make isn’t Mexican or American, it’s something else entirely – a sound that marries the regional styles blaring from speakers on one side of the border to those from the other; and a sensibility that thumbs its nose at los políticos. Border, what border?

Blending cumbia and mambo with psychedelic rock, polka, country and electronica, Orkesta Mendoza imagines what Nogales would sound like if the border didn’t exist. On their new album, ¡Vamos a Guarachar! (“Let’s Dance!”), spirits run high. Effervescent horns in “Cumbia Volcadora” make for a bold, brassy stomp. Bristling with guitar riffs, “Caramelos” swaggers and struts. And dressed in their uniform of black suits and sunglasses, the band look like nothing so much as the Blues Brothers playing at a Day of the Dead party.

Sergio Mendoza grew up listening to the Mexican regional styles jostling for headspace in a young, music-mad mind – cumbia mainly, but mambo, rancheras and mariachi too. The border is always a fierce arena of exchange, both commercial and cultural, and so there was American music too. At one point ‘rock and roll, the classics’, as Mendoza himself deadpans, seemed to win out and he stopped playing those ‘Latin styles’ for a good decade and a half.

The return to those sounds was a strong one in the band’s 2012 release ‘Mambo Mexicano’, co-produced by Mendoza and Joey Burns of Calexico – a band for which Mendoza has become an increasingly integral touring and recording member. While that record had a studied air, tentative in parts (as befits the renewal of an old love affair), ‘¡Vamos A Guarachar!’ is another beast entirely: by turns raucous, tender and plain serious fun, it also bears a robust electronic edge, a keen pop sensibility and all the hallmarks of Mendoza’s love of 60s rock. Focused, fierce and beautifully executed by a superbly drilled set of musicians, it is a record that fully matches the band’s explosive live performances.